Devarishi Narada declares his idea on devotion after stating the different opinions of various Sages in the 3rd section of the first chapter of Narada Bhakti Sutra thus:
नारदस्तु तदर्पिताखिलचरत तद्विस्मरणे परंव्याकुलतेति |
According to Narada ‘total dedication of all actions at the altar of the Lord, and at all moments of forgetfulness of the Lord, excruciating pangs’ is Supreme Love-Divine. To surrender all activities unto the feet of the Lord, to remember Him at all times and to feel desperate when one notices even a few moments had gone by in forgetfulness of the Lord is Supreme Devotion says Sage Narada.
मोक्षकारणसामग्र्यां  भक्तिरेवगरीयसी  |

स्वस्वरूपानुसन्धानं  भक्तिरित्याभिधीयते || (विवेकचूडामणि :३१ )
Among the instruments and conditions necessary for liberation bhakti alone is supreme. A constant attempt to live upto one’s own Real Nature is called single pointed devotion, says Adi Shankara in Vivekachudamani.
Love alone is the path and by love alone can we reach Love. A life without love is of no account.  Lets not ask ourself what kind of love we should seek, spiritual or material, eastern or western. Divisions only lead to more divisions. Love has no labels, no definitions.  It is what it is, pure and simple.
We can study God through everything and everyone in the universe, because God is not confined in a mosque, temple or church. But if we are still in need of knowing where exactly His abode is, there is only one place to look for Him: in the heart of a true lover/devotee.
One of the devotees (gopies) in Brindavan told Uddhava, “We can practice yoga only where there is a sense of separation. Here to us there is nothing but total merger with our Shyamsunder (Dark beauty Krishna).”  This was the depth of perfect devotion that the Gopies had for their Lord Krishna. These loving Gopies were not sentimental lovers of Krishna as generally believed. They knew His Eternal nature as the ‘Sarvatman’, the Self in all. Thus in the giddiness of Love, the Gopies never once gave up a moment of their constant recognition of Krishna’s true nature as the ‘Supreme Self’.
The result of their faithful and deep devotion was that Lord Krishna, Himself, once confessed to them that He was indebted to them for the pure Love they showered on Him. He requested them to release Him of this huge indebtedness so that He may be saved from His obligations which he would not be able to clear even if He served them for eons. (Bhagavatam)
Truly when we step into the zone of love, language as we know it becomes obsolete. That which cannot be put into words can only be grasped through silence.
Posted by Acharya Vasudha at 1:22 PM 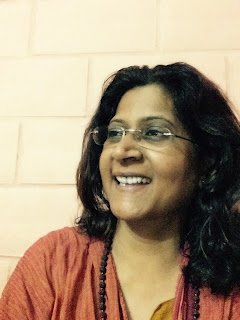